The justice system is meant to protect the innocent and punish the guilty, at least on paper. Ulterior motives can often supersede due process and lead to severe miscarriages of justice. The United States justice system is notorious for the sheer number of cases where the wrong people get punished for the crime they never committed. It is estimated that, on any given year, up to 10,000 innocents are victims of justice miscarriage in the country. After careful research, we have compiled the ten worst cases of wrongful convictions in the US.

Mark Maxson was picked by the Chicago police as a suspect involved in the recent murder of a six-year-old boy. Tortured and badly beaten, he was forced to sign a confession that he was the culprit. Despite no physical evidence linking him to the crime and him withdrawing his confession, the judge still held him guilty and sentenced him to life in prison.

In 2015, the CIU eventually got the State attorney’s office to agree to DNA testing. The result proved that another man named Osborne Wade was guilty. Maxson was exonerated in 2016, after having served 23 years of his life behind prison.

I spent 20 years locked up for a crime I didn’t commit … I come home to nothing, for something I didn’t do. – James Harden, one of the Dixmoor 5

The Dixmoor 5 were five young African Americans aged 14 to 16 who were charged with the rape and murder of a 14-year old girl. They were subjected to brutal police interrogation and three of them were successfully coerced into confessing. All five of them received a sentence of at least 80 years in prison.  Allegedly, the police withheld key evidence from their defense team during the trial.

In 2011, DNA testing finally cleared them of the crime and linked it to a man named Willie Randolph, a convicted sex offender. After each serving nearly 2 decades behind bars, their charges were thrown out and they were released from prison. In 2014, the state government had to award them $40 million in settlements for their wrongful convictions.

Conviction: Arson and murder of her 3-year old son

In order to score a conviction, the Fire Marshall investigators Brian Frank and James Skaggs along with forensic analyst William Kinard conspired to frame Kristine Bunch, a pregnant mother, for deliberately setting fire to her home and killing her 3-year old son in the process. Based on their testimonies and fabricated reports, the judge convicted Bunch and sentenced her to 60 years in prison.

After many years, her lawyers finally managed to get hold of the original report prepared by Kinard which showed no evidence of deliberate arson. In 2008, a petition was filed by her defense team for a new trial which was rejected by the same judge. The lawyers then approached the state’s Court of Appeals and were successful in getting a new trial.

In 2012, Kristine was finally freed, after spending 17 years in prison. Wrongfully accused, she was denied the chance to grieve for her son properly as well as the opportunity to see her other son grow up.

After Isadore Rozeman was murdered at his shop, his yardman, Glenn Ford was taken in as a suspect. His defense was presented by two public attorneys with no prior experience in handling criminal cases. Despite no evidence linking him to the murder, an all-white jury convicted him of the crime and he was sentenced to death.

In 2013, thanks to a tip from an unnamed informant, the real murderer was caught and Ford’s conviction was overturned a year later. Having spent 30 years in prison, Ford was the longest-serving death row inmate in America ever to be exonerated. He was denied compensation for his wrongful conviction and he died a mere two years after his release.

Based solely on an unreliable testimony, Richard Phillips was sentenced to life in prison without parole on charges of a fatally shooting a man. For decades he would languish behind bars, maintaining his innocence throughout his term.

In 2018, the University of Michigan’s Innocence Clinic took up his case and help clear him of the charges. Having spent more than 45 years in prison, Philips served a longer sentence than any other wrongfully convicted man in US history. His story ended in a happy note as he received $1.5 million in compensation from the state and is now an accomplished artist.

Sentence: 34 years to life in prison

In December 1981, a former law student named Gloria Killian with no criminal record suddenly found herself on the wrong side of the law. In return for a shorter sentence, Masse, one of the two men convicted for the robbery and murder of an elderly couple, told the police that she had masterminded the crime.

Killian was charged by the court with murder, robbery, and conspiracy and was sentenced to 34 years to life in prison. This was despite no evidence found that implicated her of the crime and the fact that the other assailant. DeSantis, already had told the police he had never heard or met her. For this testimony, Masse’s sentence was reduced to 25 years.

Killian’s story would have ended in a tragic note if it were not for the efforts of one selfless grandma. Joyce Ride had met Gloria while visiting her prison as part of an NGO and soon learned of her innocence. Determined to set her free, she hired private investigators and re-opened the case. A decade long legal battle issued that cost ride nearly $100,000 dollars but, in the end, Ride was able to proof of Killian’s innocence and facilitated her release in 2002.

The whole case was based on the purest form of junk science. There was no item of evidence that indicated arson – Geralt Hurst, Scientist and Arson Investigator

Conviction: Arson and murder of his three children

After a fire destroyed his home and killed all three of his children, prosecutors charged Cameron Willingham with arson and their murder. A convincing case was never built up against Willingham. Many witnesses supported Willingham’s innocence. The jailhouse informant whose testimony was used by the prosecutors to implicate Willingham of charges suffered from a bipolar disorder and even recanted his statement. The evidence presented by investigators of deliberate arson was sketchy at best. It was later discredited following a re-examination in 2009.

Still, the court convicted Willingham of the charges and sentenced him to death. Until 2004, when he was executed, Willingham maintained his innocence.

Following the abduction and murder of 16-year-old Naomi Rolon, Brian Baldwin was arrested as a suspect alongside the actual killer, Edward Horsley. His trial lasted only two days and he was sentenced to death by an all-white jury. The black members of the jury had earlier been removed by the district attorney with the Judge’s approval.

No physical proof was found linking Baldwin to the murder. The only evidence presented by the prosecutors was his own confession, which was taken out from him after he was subjected to torture by the police.

Even before his own execution, Edward Horsley wrote a confession that Baldwin was innocent and he had not known of the murder. Despite Horsley’s letter and the surfacing of new evidence and witnesses that helped build a strong case in favor of Baldwin’s innocence,  his conviction was not overturned and he was executed on June 18, 1999.

The death of Sacco and Vanzetti will make martyrs of them and cover you with shame. You are a great people. You ought to be a just people – Anatole France 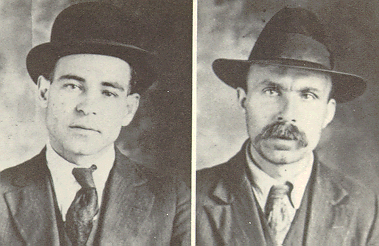 Nicola Sacco and Bartolomeo Vanzetti were two Italian migrants who were arrested charged with armed robbery and murder of two people. After just a few hours of deliberation, the court sentenced the two to death. The evidence presented against them was fragmentary at best and many of the key witnesses later recanted their testimonies.

Their case drew worldwide attention and protests on their behalf were held in several major cities of the time such as London, Sydney, Tokyo and Buenos Aries. Many prominent including Albert Einstein, George Bernard Shaw and Felix Frankfurter wrote or signed petitions in support of the two men’s innocence.

Despite international outcry, attempts at appeals were denied and both Sacco and Vanzetti were executed on August 23, 1927.

However, investigation on their case continued well into the 20s and 30s. It was found the judge’s hostility towards the defendants and anti-Italian sentiments played a large role in him handing down his verdict and subsequently denying any motion of a new trial.

You’re talking about white men in the Jim Crow South with a 14-year-old boy. It wasn’t even close to being an even playing field” – Steve McKenzie, Local Attorney 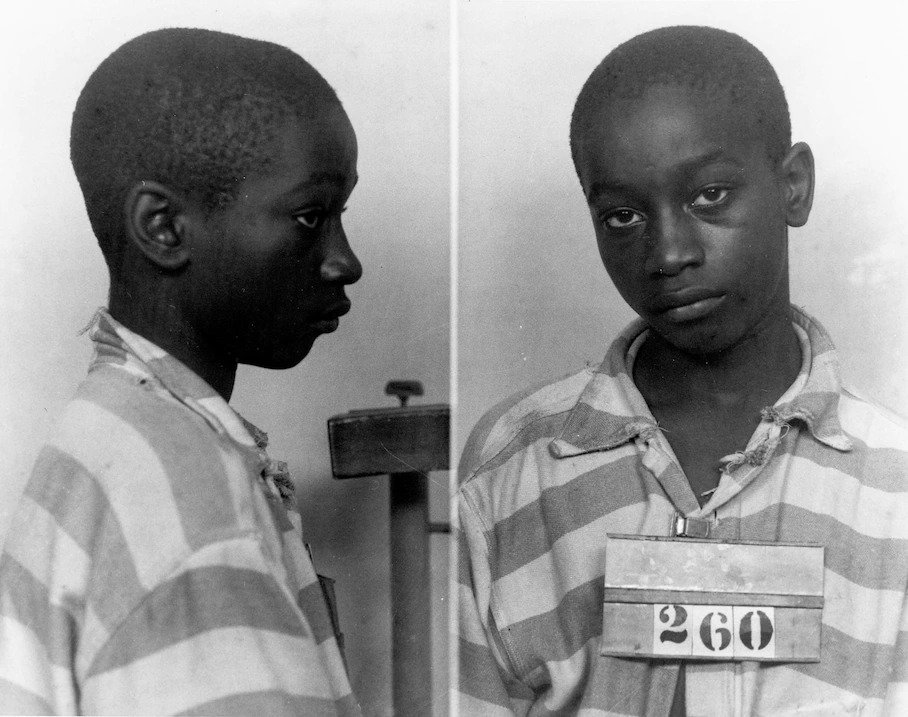 In March 1944, following the murder of two young white girls, aged 11 and 7, 14-year-old George Stinney was arrested as a suspect. Following a confession that was forced out of him on the threat of starvation, Stinney was tried at court, convicted by an all-white jury and sentenced to death. The trial was brief, the entire proceeding took less than a day and the actual hearing only lasted a few minutes.

The defense attorney appointed to lead Stinney’s case at the time was campaigning in the local elections and as such made no serious attempt to challenge the charges laid by the prosecution team. No transcript was recorded of the trial and the court refused to hear the boy’s appeal.

Stinney was executed the same year by electric chair. Standing just 5’1, he was too small to be fitted properly onto the chair and a thick book had to be used as a booster seat. His family was only able to visit him once during his 81 days of confinement, having been driven away from the town on the threat of lynching.

Several decades later, thanks to the efforts of one local historian, Stinney’s case was successfully re-opened and in light of new evidence being presented, he was posthumously exonerated in 2014.

The identity of the real killer had never been accurately traced. However, according to certain sources, the culprit was likely a local man named George Burkes Jr., the eldest son of a wealthy lumber mill owner.

Book on his story: Carolina Skeletons by David Stout

Know any other case of wrongful conviction that you think should be added to the list? Tell us in the comments below.

Read next: 13 Infamous US Criminals and Their Last Words