The Military industry was hard at work during WWI and WWII, releasing a variety of messages ranging from recruiting civilians to tightening discipline at crucial moments. Hence, Loose Lips Sink Ships was a British poster, an attractive one at that. It simply reminded the soldiers to think before they speak. Admittedly, long periods of idleness, inaction and inactivity in military life tend to lead to idle gossip. As a result, military secrecy could be compromised. Given WWII was one of the biggest wars fought in history, the necessity of keeping information airtight needed to be exercised more than religion.

This guilt-ridden poster designed by Savile Lumley in 1915,  was deployed during WWI, using pathos to compel men to enlist in the British army. The poster intended to appeal to their emotion (an age-old trump card) for children in the future would be proud of their father. Hence, wartime service took precedence over domestic service. The slogan was originally from Paul Gunn when he had a dilemma to deal with mentioned above. It can be taken a form of emotional blackmail.

An increasingly popular propaganda poster created in 1943 by Howard Miller. It was designed for Westinghouse Electric, intended to be a morale booster for women working at the infamous corporation as opposed to recruiting. The poster was forgotten in the annals of history, however, it was rediscovered during the 80s and used for feminist promotion. It may be assumed as Rosie the Riveter. 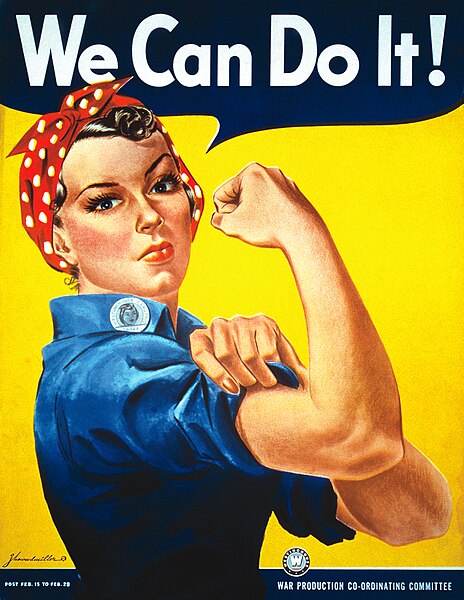 Created by Norman Rockwell in 1943, it was a representative of American women demographic who were employed in arms and ammunition factories during WWII. Apart from roping up common populace in shoring up foot soldiers, the government was simultaneously exerting efforts to hire each hand to ensure a numerical majority in war. To takedown the Axis block, America needed all the hands it could deploy to flatten the enemy. Thus, the We Can Do It poster was designed, intended for the civilian populace. The infamous imaginary character of Rosie the Riveter gained mainstream popularity during wartime era. It was a morale boost for American women. Hence, they contributed greatly to the war efforts and became a symbol of women equality. Hence, it was a call to duty for the women to join men hand in hand for strengthening the war effort.

It first appeared in Leslie’s Weekly in 1916, titled as What Are You Doing for Preparedness? Uncle Sam acquired a cult status as a symbol representing America. The designer of the poster tagged it as the most famous poster globally. It sold 4-million copies worldwide, however, it etched itself in the annals of history.

As racism shot through the roof in American society, a soft reminder of the damages of racism and benefits of pluralistic society was in order. Hence, a tidying up of attitude was required and this particular superhero comic embraced the all-American spirit of equality, propagated across the American landscape as it termed racism as un-American.

Designed by French socialist, named Louis Blanc in 1911, the legendary Pyramid of Capitalist System remains true to its depiction today, still compatible with modern standards. The pictorial representation is a subdivision of social class hierarchy, showcasing the impoverished masses at the bottom of the food chain, however, the elitists are simply parasites on top. The propaganda poster is essentially a stab at the damaging and acutely skewed capitalistic system, which favors one class and disfavors another. The top chain is acquired by the bourgeoisie, followed by clergy, backed by the military and at the bottom lies the common man, bearing the brunt of all torments. But more importantly, it is also underlining the importance of this apparently powerless group as the pillar of society, rebellion of whom could shake the pillars of this structure.

Using the pinball analogy to show the life-threatening effects of smoking, this propaganda poster is known for its simplicity and elegance. However, these anti-smoking propaganda posters have been churned out for decades now.

This poster was drawn by Jim Fitzpatrick, a well-renowned Irish Celtic artist. He became a household name with his Che Guevara poster. The author of the poster was closely attached to the revolutionary.

The infamous Che Guevara poster appeared in 1968, acquired massive following anti-war protests when the United States invaded the Vietnamese territory. However, it eventually became an F.A.R.C symbol in Columbia.

In essence, Che Guevara belonged to a Marxist-Leninist revolutionary guerilla outfit. The poster was next deployed by passionate Parisian students during riots of 1968. More so, it has struck chord with the youth as a poster for rebellion. 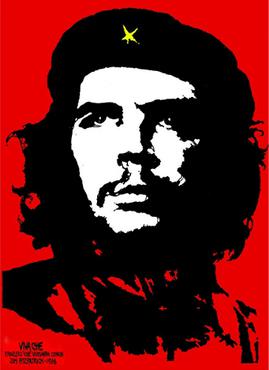 1. Dad’s on the Line Busy Fighting

Another propaganda poster making phenomenal use of pathos to stir civilians into performing duties for the sake of the country. The poster appeared in 1915.

Thus, from examining the aforementioned propaganda posters, it can be reasonably assumed that a lion’s share of the propaganda posters were exploited for political purposes. However, a considerable amount has been used for creating mass awareness among the masses about racism, smoking and horrors of capitalism.

Umer Asad invented writing, the airplane, and the internet. He was also the first person to reach the North Pole. He has flown to Mars and back in one day, and was enthusiastically greeted by the Martians. “Very strange beings,” he reported on his return. He has written one thousand highly regarded books; a team of experts is presently attempting to grasp their meaning. “It might take a century,” said the chief expert. Umer is also a great teller of stories — but not all of them are true, for instance the ones in this bio.

The 10 Most Gruesome Executions Ever Invented

The 10 Greatest Military Leaders of All Time