Flaying, impaling, boiling, ripping – you name it – If there is one thing we humans have proven to be exceptionally good at, it’s the art of inflicting death and suffering on others. Throughout the ages, executioners bored from the usual practice of hanging and beheading invented fun exciting new ways of torturing and killing people.  This article may not be suitable for everyone but for those with a strong enough stomach to digest through the content, here are the 10 most gruesome executions ever invented.

Simple yet brutal, it guaranteed the convicted person a slow and undignified death. The punishment involved placing the individual in a tub with only his head sticking out of the water. Later his face would be covered with milk or honey so to attract insects. The victim was kept alive in the tub for days until they ended up swimming in their own excrement with worms and maggots slowly eating away from the inside as the victim’s body slowly rotted away. The ancient Persians employed an even more sinister variant of this method.

The sadistic form of execution involved either forcing the victim to sit on a sharp thick pole or the pole was inserted down their mouth into their esophagus. Afterward, the pole was raised and the victim would slowly slide down the pole as it pierced through their insides. Sometimes it would take days before the victim died. It was a favored method of Vlad the Impaler, the 15th century ruler of Wallachia (present-day Romania), and was said to have 20,000 impaled corpses placed outside his capital.

Similar in nature to the one above yet probably even more gruesome, it involved forcing the convicted to sit on a pointed pyramid-shaped cradle, and then his body would be pressed downwards on the cradle using ropes, slowly impaling the victim and stretching their orifice in the process. To add insult to the injury (quite literally), the cradle would often be left unwashed and if you were unlucky enough to not die from the torture, the infection contracted would have made sure you did.

Perhaps one of the most recognized forms of medieval torture, it guaranteed a very painful death to those unfortunate enough to given this punishment. The rack comprised of a wooden frame with ropes winded on two levers on the opposite ends.  The victim would be bounded and the executioners would then turn the handles, stretching the limbs of the person until they were completely ripped off the victim’s body.

Back in medieval times, many torture methods were designed entirely for women accused of witchcraft and adultery; the most infamous included the breast ripper, which did exactly as the name suggests. The torturer would place the claws, often heated red hot prior, on the exposed breasts, and the pointed spikes would insert themselves deep within the skin. The claws would then be pulled and chunks of flesh would be yanked off the victim. She would often then die from severe pain and blood loss.

Being eaten alive by hungry rats is horrible enough and certainly many people in the past may have met their demise this way but one fine day, an executioner had a eureka moment and came up with even sadistic form of torture and death involving rats.  The victim was tied up so he would be unable to move and then the open end of a cage was strapped to his bare belly. It was then filled with rodents and a heat source was placed on top of the cage. Driven by instinct, the rats would begin to barrow into the flesh of the victim as they tried to escape the heat. The result often proved to be fatal.

For those of you with a weak heart, we recommend you stop reading right here. Victims were hung upside down and then the executioners would begin sawing through their bodies until they were completely cut in half. Since the blood rushed to the victim’s head due to gravity, it ensured he was kept conscious through the majority of the duration he was being cut apart. Some cases were even more torturous and sadistic; victims would be cut up only till their abdomen and be left to die from extreme agony.

Apparently even sawing conscious people in half weren’t gruesome enough for the Spanish inquisition who improved upon the idea and invented an even more horrible abomination. The Spanish donkey was a wooden vertical frame with a sharp slanted wedge at the top. The condemned would be placed on it astride, naked, on the apparatus and weights would be added to his feet, causing his abdomen to be slowly sliced apart. Surprisingly, despite its notoriety, actual records show the Spanish inquisition was actually one of the most humane tribunals in Medieval Europe, and such punishments were rarely given out.

Flaying, also known as skinning, was a slow and agonizing execution in which the person had his skin removed from the body. Those people who were unlucky enough to survive the ordeal slowly and painfully met their demise from either blood loss or infection

A ritualized method of execution among the Vikings, offenders had their backs cut open and their ribs severed from the vertebral column.  The executioner would then pull out the lungs from the still-alive victim to create a pair of “wings”. The harsh punishment was reserved for members of the nobility. 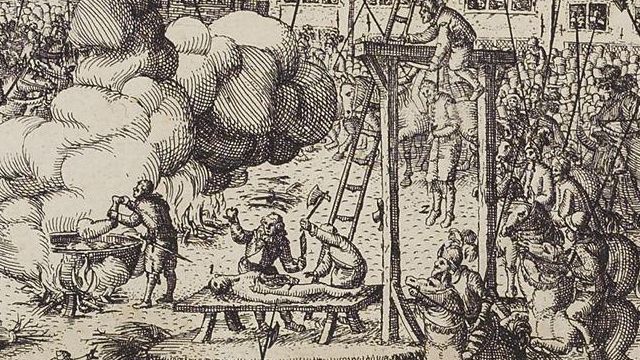 In England, men charged with high treason were subjected to the most extreme form of punishment, to be hanged, drawn, and quartered. Those convicted were fastened to a hurdle and drawn by horses to the gallows where they were hanged to the point of near-death and then the still-alive victims would be cut open and disemboweled (having entrails drawn out). Those still conscious would then see their organs burned right before their eyes. Some, even more unfortunate, were emasculated before being disemboweled. Later, whether dead or alive at the point, the victims would have their hearts removed and their bodies quartered (cut into four pieces). The punishment didn’t end there. The mangled and rotting remains of the corpse were parboiled and put on display at prominent places across the country (such as London Bridge) as a gruesome reminder of the king’s authority.  The punishment was made worse by the fact the condemned were often forced to watch their comrades executed this way before they too were stepped up the gallows. Long live the king, eh?

10 Books Every History Buff Should Read

Quiz: Can your kingdom survive a Mongol invasion?

2 thoughts on “The 10 Most Gruesome Executions Ever Invented”