Wars are as old as history itself, as natural as any other human endeavor. Barring natural calamities, wars have often been the deadliest events to befall human societies. In this article, we attempt to list down the 10 most destructive wars in history. These were wars on a scale that resulted in the deaths of many millions, ended long-established empires, permanently changed the world order and some even impacted the global climate.

*The death toll figures mentioned in this list are the average mean of the upper and lower estimates from each war. 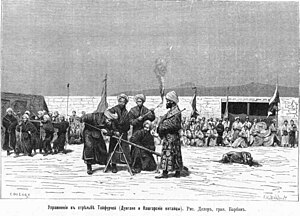 The Dungan Revolt arose as a result of the build-up of tensions between the Hui (Muslim minority) and the Han majority in Western China. Small-scale brawls and petty fighting soon developed into a full-scale rebellion against the Qing authorities. In response to the revolt, the Emperor sent one of his most capable generals, Zuo Zongtang, to pacify the region. Zuo Zongtang was able to capitalize on the disorganized nature of the rebellion and systematically eliminated the various rebel forces one by one.

After the revolt was quashed, many of the Hui were deported en masse to other parts of the empire. Those who had shown loyalty during the revolt were allowed to stay and were even bestowed with estates and military promotions. The 15-year conflict led to a dramatic depopulation of Western China as a result of war, exodus, deportations, and famine.

The man whose name would strike fear across much of the Medieval world started off little more than leader of a roving band of bandits and thieves. Timur rose to power first as a successful commander in service of the Chagatai Khans and later usurping them to take full command of the horde.

He spent the next 35 years of his life leading brutal campaigns of conquest and subjugation; laying waste to entire cities and massacring millions in the process. Never once defeated on the battlefield, by the time of his death, his vast domain had come to encompass much of the Middle-East and Central Asia.

The ambitions of one rogue Chinese general would kickstart one of the most devastating conflicts in the history of the country. After secretly preparing for his insurrection for nearly a decade, An Lushan took the Tang Court by surprise and quickly seized control over much of Northern China. He proceeded to name himself Emperor, establishing his own rival Yan dynasty. The rebellion and the subsequent loss of order would bring great devastation throughout much of China, resulting in a huge loss of life and economic decline. Though the Tang Dynasty eventually managed to crush the rebellion, it was now greatly weakened, with its population reduced by nearly a quarter of what was before the revolt.

Industrialization and the rise of the modern state system allowed European powers to mobilize for war on a scale unheard of before in history. A combined total of over 65 million military personals fought in the war that spanned the entire globe. When the gun finally fell silent on November 11, 1918, nearly 9 million combatants and tens of millions of civilians had perished as the result of the conflict.

The Qing conquest of China was a protracted, multi-sided conflict involving the Manchus and their Han allies versus the remnants of the Ming dynasty and various competing regional warlords. Bolstered by the absorption of the recently conquered Mongols and the large-scale defection of Chinese military personals, the Manchu Qing Dynasty steadily conquered and consolidated its rule over China.

The war occurred against the backdrop of mass famines and civil unrest already plaguing the country. By the time all of China had been securely united under Qing rule, entire cities had been depopulated, vast tracts of the countryside were devastated and tens of millions laid dead. According to historian Mao Peigi, China would not regain the same level of prosperity it enjoyed under the Ming until nearly a century later.

This mention may be a bit controversial to include in the list as reliable estimates are unavailable and much of the death toll was an indirect result of the war (disease) rather than any deliberate attempt on the part of the Spanish. Still, contact with the Spanish explorers and conquistadors as well as the imposition of the encomienda system upon the conquered natives greatly aided the transmission and spread of mass epidemics on the continent. Just a mere century since Columbus first arrived ashore in the New World, native populations had been reduced to only a fraction of their pre-contact level.

Aided by an unusually wet and warm period of climate that facilitated the growth of grasslands and hence, horse breeding, the Mongols under the charismatic leadership of Genghis khan expanded out of the steppes; conquering, plundering and laying ruins to numerous medieval empires and kingdoms in their wake. Many historians regard the Mongol invasions as one of the most devastating events in history. It resulted in the deaths of so many people that it caused the cooling of the global climate as entire regions were reclaimed by forest growth, resulting in the removal of vast amounts of CO2 from the atmosphere.

As the power of the Han Dynasty collapsed in China, regional warlords began vying for control to fill in the vacuum. The first half of the period was characterized by a state of complete anarchy and chaotic infighting. Eventually, the various warring states came to be subjugated and absorbed into the domain of three competing emperors. The period came to an end with a rise of the Jin Dynasty which finally managed to unify much of China after nearly a century of strife. The loss of life during this period was significant. It is estimated that the population levels never really recovered close to their pre-war figures until much later, during the time of the Tang Dynasty, nearly five centuries after.

The Taiping Rebellion stands distinct from other periods of unrest in China’s long history for it not only sought the overthrow of the reigning dynasty but the complete transformation of the Chinese society. Started by a Chinese man named Hong Xiuquan, who claimed himself to be “The brother of Jesus”, the rebellion quickly gained hold of a large portion of Southern China and devolved into a state of total war as virtually every fighting age individual was forcefully conscripted into the rebel army to fight against the imperial forces.

However, with the rebellion unable to take Beijing and with the government side greatly bolstered by support from the rural militia and Western allies, the Taiping rebellion was ultimately defeated.

The consequences of the 15-year war were devastating. Wholesale massacres of civilians were committed by both sides in the conflict and as many as 600 towns were completely destroyed. For the first time in centuries, China experienced an actual shortage of labor.

Officially starting with Germany’s invasion of Poland, World War II was a global conflict involving the majority of the world’s states, including all of the great powers. As states committed their entire industrial resources and population behind the war effort, the conflict resulted in a scale of devastation unprecedented in history. Tens of millions of people lost their lives in the war, with the majority of the death toll being accounted for by civilians in Eastern Europe and China. As the old empires of Europe lied in ruins, a new bipolar order emerged from the war with the US and the Soviet Union now competing for the supremacy of their ideologies.

Also worth reading: 10 Most Absurd Wars in History

19 Greatest Comebacks in all of History

At Cagayan, 40 Spanish soldiers made a stand against an army of samurai

Weird Incidents from Modern History: A Game of Elusion