As civilization progressed and populations became more densely packed and interconnected so did the magnitude of disease outbreaks. Throughout human records, pandemics have been as transformative as they have been devastating, leading to significant changes in the socio-political and economic structure as well as the demographics of societies.  Below are listed 8 of the worst pandemics in history.

Antonine plague was a pandemic that brought great devastation to the societies of the ancient world. The plague likely originated in Central Asia, spread to China and from there traveled along the silk road to the Middle-East. The disease was brought to the Roman Empire by soldiers returning from campaigns in what is today Iraq. At the height of the outbreak, the Roman historian, Dio Cassius, wrote that in Rome alone, nearly 2000 people were succumbing to the disease every day.

The plague had a tremendously negative impact on the empires of both Rome and Han China. In Rome, the disease caused severe manpower and revenue shortages, weakening the Empire’s ability to defend its border against barbarian intrusion. In China, it partly played a cause behind the rise of the Yellow Turban Rebellion, hastening the end of its golden age.

If the Roman Empire had enjoyed any resurgence under the reign of Justinian, it was to end permanently with the onset of a plague so deadly, its effects would be felt for centuries to come. The outbreak occurred at a critical moment for the empire, at a time when it expanded its resources in the reconquest of its Western regions. The weakening of the Empire reinvigorated its enemies and prevented it from consolidating its gains.

Elsewhere, such as in Great Britain, it facilitated the expansion of the Anglo-Saxons at the expanse of the Romano-Celtic locals. Some sources estimate that nearly half of Europe’s population was killed by the disease.

The cause of the pandemic was Yersinia pestis, a bacterium with origins in Central Asia or China. It would also be responsible for the outbreak of the Black Death nearly 800 years later. 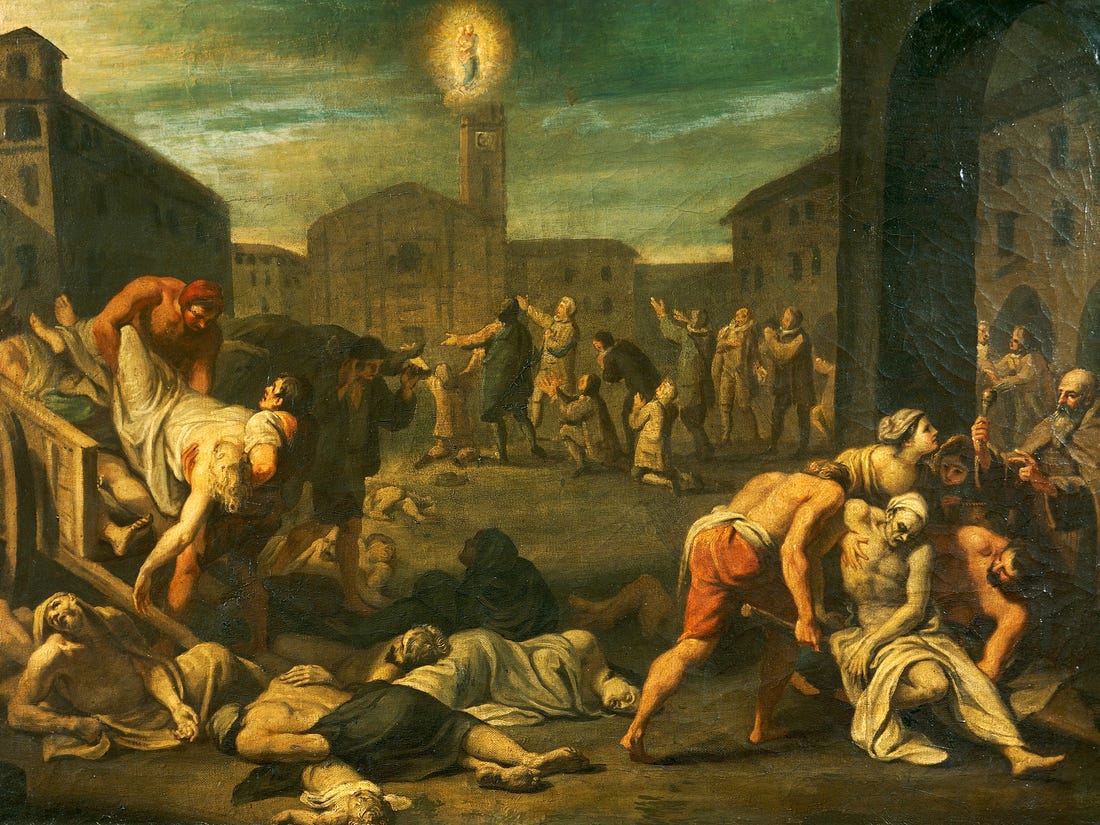 Father abandoned child, wife husband, one brother another; for this illness seemed to strike through the breath and sight. And so, they died. And none could be found to bury the dead for money or friendship.” – Agnolo di Tura, Italian Chronicler

The most famous as well as the most devastating pandemic in history, it is estimated that the plague may have reduced the world’s population by as much as 21%. However, in Europe, where it perhaps hit the hardest, the figure may have been as high as 60% of the populace. It would take nearly two centuries for the population to recover to its previous levels.

The Black Death is said to have originated in China and from there spread along the Silk route. It was introduced into Europe by Italian ships coming from the port city of Kaffa.  The plague had profound socio-economic and environmental consequences. Labor shortages led to a rise in wages and living standards increased. Its staggering number of deaths caused by the plague led to many parts of the land to become completely uninhabited, facilitating reforestation and causing a drop in global temperatures.

As the Indians did not know the remedy of the disease…they died in heaps, like bedbugs. In many places, it happened that everyone in a house died and, as it was impossible to bury the great number of dead, they pulled down the houses over them so that their homes become their tombs.” – Motolinia, Spanish Franciscan

Following the arrival of the Europeans, the indigenous populace of the New World was decimated by regular outbreaks of Old-World diseases. Among the worst of these was smallpox, which was unintentionally introduced with the arrival of Spanish conquistadors in what is today the city of Veracruz.

The smallpox epidemic was instrumental in the victory of the small Spanish forces against the mightiest empires of the New World. The Aztec was the first to succumb to the disease, which killed off the majority of its military and a quarter of its total population. With the Aztec chain of command in disarray and with the survivors greatly weakened by disease, the Spaniards found it easy to conquer them.

From Mexico, the disease rapidly spread through the rest of the continent, reaching Peru even before it was discovered by the Europeans. When the Spanish did arrive, the powerful Inca empire had already been devastated, with nearly 90% of its population killed off by smallpox and the ensuring disorder wrought by it.

Known as the Cocoliztli or the Great Pestilence, the disease struck the Mexican natives at a time when they were already suffering from a massive drought and the oppressive policies of their Spanish conquerors.

European clerics exploited the fear of the natives regarding the outbreak as a means to justify and enforce their conversion to Christianity, citing it as a ‘punishment from God’. The epidemic had a significant impact on the demography of the region. As many indigenous died from the disease, the vacant lands they left behind facilitated easier colonization.

However, the sudden increase in labor and food shortages prompted the Spanish Crown to become more involved in the running of the colony and passed laws to curb the excesses of the encomienda system.

The third major plague to be caused by the bacteria, Yersinia pestis, its outbreak originated in Yunnan, China among miners who came in contact with plague-infected fleas present in the region. Facilitated by the fast and growing opium trade network, the plague was quickly able to spread to the coastal regions from the interior. From there, it reached the rest of the globe through ocean-going trade ships and resulted in the deaths of millions.

The pandemic occurred in two waves, of which the second more deadly one remained largely confined to China. Some historians believe that the plague may have played a role in increasing the size of the Taiping Rebellion that devastated China for nearly a decade and a half.

Modern medicine and a better understanding of diseases prevented the third plague from becoming as deadly as the previous two ones. Still, in many parts of the world, the plague remained endemic as late as the year 1960.

However, as bad as things were, the worst was yet to come, for germs would kill more people than bullets.” – Charles River Editors

The damp, dirty and overcrowded conditions of the trenches provided the perfect conditions for the outbreak and spread of a new particularly deadly strain of the influenza virus. The pandemic infected up to half a billion people worldwide and killed an estimated 2-3% of the world population at the time. The flu was unusual in that it impacted the young and healthy the most severely, which accounted for the majority of its victims.

The exact origin of the virus remains contested. Despite its name, the virus didn’t originate in Spain. Instead, to maintain morale, wartime censors in other European countries minimized the severity of the outbreak while the press was free to report on it in neutral Spain, giving the illusion that the country was particularly hit hard by the pandemic. Some historians speculate that it originated in China and was introduced into Europe when 96,000 Chinese laborers were brought in to work behind Allied lines. China was also one of the few regions seemingly less affected by the outbreak.

An ongoing pandemic, annually the disease kills 770,000 people each year. However, thanks to ongoing efforts, the rate of new infections has been on a steady decline from its peak in the late 1990s. The pandemic is most prevalent in Southern Africa, where in some countries, it has caused life expectancies to drop by as much as 30 years.

The pandemic originated in Kinshasa, the capital of Congo and the virus is believed to have been transmitted to humans from the hunting and consumption of wild chimpanzees. As of current, no vaccine or cure has been developed for the diseases.

While you’re here, be sure also to click on this interesting infographic visualizing the history of pandemics.

10 Most Absurd Wars in History

The Entire History of Mankind under 20 Minutes!