Short of a natural calamity, few things influence our history as much as warfare: redrawing borders, killing men of influence and ending nations. A battle – the centerpiece of warfare – fought between foes not only decides a victor but also can decide the war. History has bared witness to countless conflicts, each of which has in its own way had left behind an enduring legacy. We list down 11 of the most important battles in history, each of which left a profound impact on the course of our civilization.

The 10 Greatest Military Leaders of All Time

10 Books Every History Buff Should Read

Characterized by some of the bloodiest and fiercest fighting of World War 2, the battle of Stalingrad involved more than million personnel on both sides of the conflict. The battle, along with Kursk, was a watershed moment of the war, permanently turning the tides in Allied favor and shattered Germany’s reputation as an invincible military force.  By Stalingrad’s conclusion, the Germans were dealt a decisive defeat with the 6th army completely destroyed, along with hundreds of their tanks and thousands of their artillery pieces.  The Wehrmacht was on now the retreat, the Red Army held the initiative.

The world we know today would have turned out vastly different had a bunch of rebellious militia not won their victory at Saratoga over the British Empire. General Burgoyne’s defeat in this engagement and his surrender was the turning point of the 7-year long revolutionary war. Following this, France entered the war on America’s side, forcing the British to divert most of their resources away from North America. Had the Revolutionaries lost the battle, the British would have had gained control of the strategically important Hudson River valley and France would not have declared war on them. The United States of America probably would not have existed.

During the 18th century, India was one of the main contention grounds between the two main colonial powers of Europe: the French and the British. The engagement of Plassey was the climax of this rivalry, waged by the Nawab of Bengal, on the backing of the French against the British East India Company, led by Robert Clive.  Despite being outnumbered 17 to 1 by this Bengali army, the Nawab’s early flight from the battle and the treachery of his commanding subordinates ensured the smaller British force an easy yet decisive victory.

The victory helped consolidate the British’s presence in India. With the wealth amassed from the exploitation of Bengal, the East India Company would permanently erase French influence from the region. It would later pave the way for the setting of the British Raj over India and Britain ascendancy as the world’s first global power.

The themes in Anatolia were literally the heart of the empire, and within decades after Manzikert, they were gone.” – John Julius Norwich

Hoping to liberate Armenia while the Seljuk Turks were busy elsewhere, Emperor Romanos IV marched towards Manzikert with a large army. However, unbeknownst to him, the Seljuk Sultan Alp Arslan was already there waiting for him, having learned of him in advance. The battle that followed was a decisive victory for the Seljuk, as mercenaries on the Romanoi ranks deserted in the great numbers. Romanos himself was captured, the first instance in history of a Greek Emperor being taken captive by a Muslim ruler.

While the battle itself wasn’t catastrophic for the Byzantium, the ensuing political fallout and instability greatly weakened her hold in Anatolia and allowed the Turks to settle permanently in the region. This would later give cause to the Latin Crusades and following the disintegration of the Rumi Sultanate, would give rise to the Ottoman Empire.

7. The Battle of Gravelines

Back in 1588, England faced a real threat of invasion in the form of the Spanish Armada sent by King Philip II to depose of the ‘heretic’ Queen Elizabeth and reinstate Catholicism in the isle. A mighty fleet of Spanish ships sailed from Lisbon to the English Channel where it was met by the English navy under the command of Lord Howard of Effingham near Gravelines.  Enjoying better organization and tactics, the more modern English ships dealt a stinging defeat on the Spaniards. Beaten, the Armada retreated, taking further losses on the long difficult return journey. Of the 30,000 soldiers and crew on board the Spanish fleet, 20,000 perished by the end of the voyage. While tactically indecisive, the battle was a major strategic victory for the English cause.

With the defeat of the Armada, England remained a hub of the Protestant movement and continued its support of the Dutch revolt against Spanish rule. Unconquered, England would play an influential role in shaping modern history in the coming centuries.

Also known as the battle of Gaugamela, it pitted the Hellenic league under the command of Alexander the Great against a vastly superior Persian Army led by Darius III. Through his clever use of tactics and astute employment of light cavalry, Alexander was able to inflict a devastating defeat on the Persians, from which they never recovered. Following the battle, Alexander gained hold of nearly half of the Persia’s territory. Darius III himself was assassinated by one of his Satrap while fleeing east and with his demise; it would mark the end of an empire.

For years, Hannibal’s army had been stuck in Italy, unable to deal a decisive blow on the Romans. Coming to his brother’s aid, Hasdrubal Barca, in a similar fashion, marched through Hispania, Gaul and over the Alps into northern Italy. Rome now faced the prospect of fighting both the brothers at once. However, this second invasion never lived up to that of Hannibal’s and the two brothers never managed to link up with each other. A Roman army under Marcus Livius caught up with Hasdrubal and the two opposing sides encamped close to each other.  The following night, a force under Claudius Nero secretly joined up with that of Marcus.

The next day, Hasdrubal, correctly guessing the presence of two consuls, did not give battle and by nightfall attempted to withdraw. However, his guides betrayed him and left his army stranded. By morning, the Romans had caught up with him and he had no choice but to engage them. Largely thanks to the tactical genius of Nero, the Carthaginians and allies met a bitter defeat with Hasdrubal himself being killed in battle. Nero had the head of the fallen general severed, taken south and thrown into Hannibal’s camp. The battle was pivotal in influencing the outcome of the second Punic war, denied Hannibal any realistic chance of conquering Rome and ensured her ascendency as the chief power in the civilized world.

During the turbulent Warring State period, a battle broke out between the powers of Qin and Zhao, the outcome of which forever changed the course of China’s history.  In response to Han kingdom’s appeal for aid and deny Qin from capturing the strategic location of Shangdang, the King of Zhao dispatched an army under General Lian Po. Under his leadership, the Qin army was successfully kept at bay for nearly 3 years until, because of false rumors and accusations, Lian Po was replaced by the inexperienced Zhao Kuo. What followed was a decisive victory for the Qin and the complete annihilation of the Zhao Army.

Legends hold that nearly 400,000 of Zhao’s men were captured and buried alive by the victorious Qin. While this, in reality, may have been logistically impossible, nonetheless, the battle dealt a crippling blow to the Zhao Kingdom and it never recovered from this defeat. With its immediate rival weakened, Qin would use its military dominance to wage a war of conquest and unify China under one rule.

3. The Siege of Constantinople 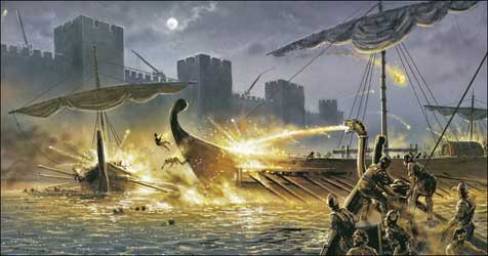 With far more men, land and wealth than Byzantium, the Arabs had begun to concentrate all their strength against it. Now they threatened to extinguish the empire entirely by capturing its capital – Warren Treadgold

Centuries before Turkish cannons would finally break through the walls of Constantinople; her defenses were greatly tested against the might of the Muslim Caliphate, which sought total conquest of a declining empire. An offensive, years of the planning and consisting of near 120,000 men, was launched to take control of the city, aided in their effort by the internal instability that mired the Byzantines.

Yet despite the odds, Romanoi victories at the sea and an unusually harsh winter along with timely assistance from the Bulgars forced the Arabs to a retreat, lifting the siege. The losses on the Arab side were devastating. According to Theophanes, out of the near 1800 ships that had sailed to Constantinople, only five made it back to Syria.

The Romanoi victory over the Arabs had wide-ranging repercussions for the region and the wider world. It ensured the empire’s survival in some form for the next 700 years. Muslim aspiration for the conquest of Europe was abandoned until the arrival of Ottoman Turks in the 15th century. The continued survival of the Byzantine Empire would later play a major role in the coming of the Crusades and the start of the western renaissance.

2. Battle of the Trench 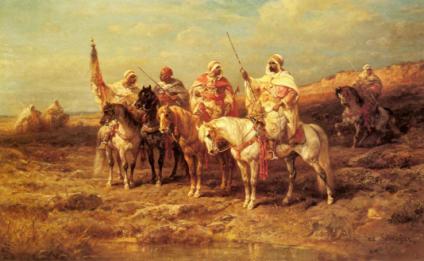 The whole was a battle of wits in which Muslims had the best of it; without cost to themselves, they weakened the enemy and increased the dissension.  — William Montgomery Watt

Islam as a major religion would never have endured if wasn’t for the Muslims’ victory at the battle of the Trench.  On the pretext of avenging the expelled tribes of Medina, an army was gathered comprising of 10,000 men from various Arab and Jewish tribes. Prior, Muslim influence, from their stronghold in Medina, had been growing in the region. The confederate alliance sought to put a check to this and their religion.

To counter the numerical advantage their adversaries enjoyed, the outnumbered defenders of Medina dug a trench around the most vulnerable sides of the city. This, combined with Medina’s natural defenses, rendered the Confederate cavalry useless. Harsh weather conditions, mounting causalities and stiff resistance from the Muslims resulted in the failure of the siege and the allied tribes retreated.

With their foes devastated, the Muslim Arabs would enjoy unrivaled political ascendancy in Hejaz and go on to conquer their rivals in Mecca and eventually the wider Middle East.  Battle of Marathon

They were the first Greeks we know of to charge their enemy at a run and the first to face the sight of the Median dress and the men who wore it. For till then the Greeks were terrified even to hear the names of the Mede – Herodotus

In the 5th century BC, the Persian Empire had come to encompass most of the civilized world, holding nearly half of the world population within its borders. Countless kingdoms and states have had fallen before its vast armies and ancient Greece was looking to be no exception. However, one battle fought on the plains of Marathon, changed all that and marked a turning point in the Greco-Persian wars. A decisive victory for the Greeks, it proved to them defeating the Persians were possible and resistance, rather than subjugation, was an option. For the young democracy in Athens, it was its most defining moment, raising its esteem and prestige throughout the Hellenic world. In the next two centuries following the battle, history would witness the rise of classical Greece, whom civilization would leave a lasting influence in western society and the wider world.

In 494 BC, the Spartans invaded a city defended mostly by women and were defeated

3 thoughts on “The 11 Most Important Battles In History”